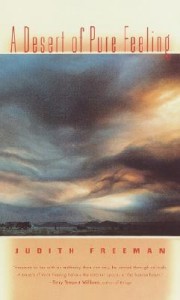 A Desert of Pure Feeling by Judith Freeman.

A Desert of Pure Feeling is a haunting novel of passion and renunciation. Twenty-five years after she lost him, Lucy Patterson encounters Dr. Carlos Cabrera, the man who saved her son’s life and wrenched her own life onto a violent new trajectory. Now Lucy has sought refuge in an isolated motel outside Las Vegas, hoping to make sense of the past that has finally caught up with her. But in the next room the present is calling in the person of a young woman—a single mother, stripper, and prostitute—who is as needy and troubled as Lucy herself once was. What ensures—between these two women and between Lucy and the ghosts of her former life—makes A Desert of Pure Feeling as wise as it is poignant, a powerful exploration of what it means to be a lover, a mother, an artist, and a friend.

“A spare and elegiac melody master who accurately captures the heart and heartache of the modern romantic dilemma‚ Freeman’s eye is mesmerizing and merciless.”

"Once again, as she did so brilliantly in The Chinchilla Farm, Judith Freeman takes on a voyage both outward and within the soul; her characters are so fully realized, that landscape so vivid, the prose so fine, that A Desert of Pure Feeling lives on long after you reach the end.”

“Judith Freeman is one of the finest writers of our generation.”