A captivating, emotionally taut, beautifully written story about the complexities of a friendship between two women—and how it shapes and reshapes, both of their lives

“The Latter Days, written with thoughtful, hard-won honesty, is the record of a girl growing up in a closed society rigidly governed by a male religious hierarchy-a profoundly undemocratic system that claims to embody American values. Painfully but with no rancor, Freeman makes vivid the security of belonging and the rewards of obedience, the costs of security and obedience, and the rewards and costs of seeking freedom. A brave and valuable book.”

The Long Embrace: Raymond Chandler and the Woman He Loved by Judith Freeman.

Raymond Chandler was among the most original and enduring crime novelists of the twentieth century. Yet much of his pre-writing life, including his unconventional marriage, has remained shrouded in mystery. In this compelling, wholly original book, Judith Freeman sets out to solve the puzzle of who Chandler was and how he became the writer who would create in Philip Marlowe an icon of American culture. Visiting Chandler’s many homes and apartments, Freeman uncovers vestiges of the Los Angeles that was Chandler’s terrain and inspiration for his imagination. She also uncovers the life of Cissy Pascal, the older, twice-divorced woman Chandler married in 1924. A revelation of a marriage that was a wellspring of need, illusion, and creativity, The Long Embrace provides us with a more complete picture of Raymond Chandler’s life and art than any we have had before.

Red Water was also chosen as one of the 100 Best Books of that year by the Los Angeles Times Book Review. It won the Utah Book Award, and was short listed for the Mountain and Plains Bookseller Award, and was widely reviewed and praised.

A Desert of Pure Feeling by Judith Freeman. A Desert of Pure Feeling is a haunting novel of passion and renunciation. Twenty-five years after she lost him, Lucy Patterson encounters Dr. Carlos Cabrera, the man who saved her son’s life and wrenched her own life onto a violent new trajectory. Now Lucy has sought refuge in an isolated motel outside Las Vegas, hoping to make sense of the past that has finally caught up with her. But in the next room the present is calling in the person of a young woman—a single mother, stripper, and prostitute—who is as needy and troubled as Lucy herself once was. What ensures—between these two women and between Lucy and the ghosts of her former life—makes A Desert of Pure Feeling as wise as it is poignant, a powerful exploration of what it means to be a lover, a mother, an artist, and a friend.

The Los Angeles Times called the author, “A spare and elegiac melody master who accurately captures the heart and heartache of the modern romantic dilemma‚ Freeman’s eye is mesmerizing and merciless.”

Terry Tempest Williams said: “Freeman writes with an authority that can only be earned through solitude. A Desert of Pure Feeling honors the interior spaces of the human heart.” 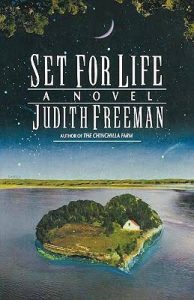 The Chinchilla Farm by Judith Freeman.

The Chinchilla Farm was Judith Freeman’s first novel, it tells the story of Verna Flake. Raised a Mormon in a small town in Utah, and married to a stiflingly conventional adulterer, Verna has gotten tired of pretending. So she heads for Los Angeles, where people have the freedom to find themselves over and over again. There she connects with a woman from her past, and agrees to drive her to Mexico where a violent episode ensues. In this lyrical and keenly observant novel Judith Freeman captures the solitude, the dislocation, and the offbeat optimism of the American West in a way that raises comparison with Louise Erdrich.

The Chinchilla Farm was widely praised when it came out in 1989, and has not been out of print since. In The Nation, Pagan Kennedy wrote, “The Chinchilla Farm is a tremendous coup for a first novel, for any novel. Freeman reintroduces us to an America of transcendental landscapes, cultures like forgotten flowers, and festive, fierce cities.”

The New York Times called The Chinchilla Farm “a remarkable first novel. . . an almost Tolstoyian insight into the human plight,” and went on to say, “Judith Freeman has written a beautiful book.”

Diane Johnson, writing in the New York Review of Books, called Freeman’s first book an “elegiac novel,” and said that the narrator Verna Flake was “a rare creature, a reliable female narrator, whose preoccupations are with what she sees and learns about the world instead of with the resolution of her own story.”

The New Yorker said of The Chinchilla Farm: “Incidental to this novel is a plenitude of facts more wonderful than fiction‚ lyrical but tough-minded‚ extraordinary.”

And from Ursula K. Le Guin: “Under the plain honesty and generosity of Judith Freeman’s writing is a delicate and impressive artistic strength. I read The Chinchilla Farm right through as a fascinating story, but it lingers in my mind as a true journey through the desert of the West and of the soul.” 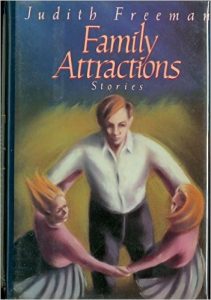 Judith Freeman’s story collection, Family Attractions (Viking 1988) and her second novel, Set for Life (W.W. Norton 1991) are now out of print but can be found through second-hand sources.