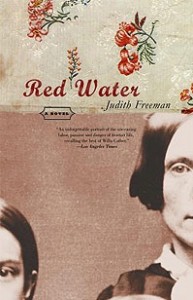 Red Water was named the 2002 best book of the Southwest by theTucson Book Review.

Red Water was also chosen as one of the 100 Best Books of that year by theLos Angeles Times Book Review. It won the Utah Book Award, and was short listed for the Mountain and Plains Bookseller Award, and was widely reviewed and praised.

alled the book “a poignant, searching memoir of self-discovery.”

She has collaborated with other artists and writers on projects.  During a year spent in Rome in 1999, she collaborated with the prize-winning composer Chris Theofanidis, providing the text for Song of Elos, a piece for soprano and string instruments that was performed at Carnegie Hall, The American Academy of Rome, and the Da Camera Society in Houston.  She also traveled to India in 1992 with her friend, the photographer Tina Barney, where they spent seven weeks photographing and writing about an extended family in Rajasthan.  She lives in Los Angeles and rural Idaho with her husband, artist photographer Anthony Hernandez.