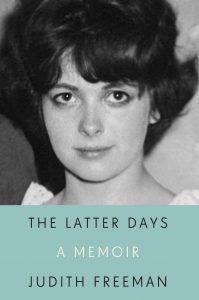 AN ARRESTING, LYRICAL MEMOIR about the path the author took-sometimes unwittingly out of her Mormon upbringing and through a thicket of profound difficulties to become a writer. At twenty-two, Judith Freeman was working in the Mormon church-owned department store in the Utah town where she’d grown up. In the process of divorcing the man she had married at seventeen, she was living in her parents’ house with her four-year old son, who had already endured two heart surgeries. She had abandoned Mormonism, the faith into which she had been born, and she was having an affair with her son’s surgeon, a married man with three children of his own. It was at this fraught moment that she decided to become a writer. In this moving memoir, Freeman explores the circumstances and choices that informed her course, and those that allowed her to find a way forward. Writing with remarkable candor and insight, she gives us an illuminating, singular portrait of resilience and forgiveness, of memory and hindsight, and of the ways in which we come to identify our truest selves.

“The Latter Days, written with thoughtful, hard-won honesty, is the record of a girl growing up in a closed society rigidly governed by a male religious hierarchy-a profoundly undemocratic system that claims to embody American values. Painfully but with no rancor, Freeman makes vivid the security of belonging and the rewards of obedience, the costs of security and obedience, and the rewards and costs of seeking freedom. A brave and valuable book.” “The relationship between feminism and religion, and religion and the state are topics a lot of us are thinking about right now. Read more...

“The relationship between feminism and religion, and religion and the state are topics a lot of us are thinking about right now.  I’m posting this text of an introduction Ursula K. Le Guin delivered when I appeared at Powell’s Books in June 2016, at a reading from my memoir, “The Latter Days.”  Ursula is one of the writers and thinkers who has been most valuable and helpful to me in forging my own identity as a writer, the girl who, as she puts it, blundered into freedom.  When my first novel was published in 1989 Ursula introduced me at a reading at Powell’s.  The picture above is from that first event, the one that led to our deep friendship. Ursula died in January, two years ago.

“Judith came to Powell’s back in 1989 to read from her first novel, The Chinchilla Farm.  I am happy to welcome her back to read from her new memoir, which gives us the real-life background of that wonderful story of how a girl can blunder into freedom.

Latter Days tells us about what life’s like when your religion is also your government — a government whose decisions are unarguable because authorized directly by God.

The men who wrote the U.S. Constitution were so afraid of the terrific power of a religious state and so aware of the difficulty of combining a hierarchical religion with a democratic government, that – after honest and civil acknowledgments to God — they wrote religion right out of the government of the United States.

Ever since then, organized believers have struggled to sneak it back in. The “religious Right” that is such a powerful force in our politics is not just fundamentalist Christian but also, less noisily, Mormon. Though there are fewer Mormons than Jews (under 6 million) in the United States, we haven’t yet had a Jewish candidate for President, but we just had a Mormon one.  The Mormon establishment offers radical conservatives a successful model of non-militarized control of civil life by a religious hierarchy — politically reactionary, patriotic, pro-capitalist, intensely secretive, and entirely male.

Judith Freeman tells us about being a girl growing up inside a power structure that is in many ways like an Islamic state.  We see and feel the trust, the security, the real happiness, that prevail in that society — and the subjection of thought to belief, of freedom to authority, and of women to men. Judith is stunningly honest – and yes, she is under ex-communication for it – and also stunningly unresentful.  She’s not taking revenge on anybody.  She’s hate-free.   She’s just getting some air and light into a secretive corner of our troubled Republic.  This is a fascinating, timely book – and a very moving one.”

“I’m trying to put my finger on why the story of a young girl’s coming of age in a Mormon household in Utah during the Fifties and Sixties—a girl who just happens to have become one of our most prominent writers—has so captivated me. Even more than the story itself, fascinating on its own merits, it was the elegant style of its storytelling, the cool, unexpectedly sophisticated tone. Unlike many a memoir of growing up in a constricting, sometimes dangerous environment, Freeman lets the evidence stand for itself. There’s no hyperventilating— did you see how bad this was? Do you see how nuts this is? Can you believe? Can you imagine?…. I was impressed by her even-handedness in her memoir. We’re given a picture of a time and a place, and of life within an all-encompassing faith—in its positive aspects as well as its strangeness….A compelling story, compulsively readable, and its authorial voice—calm, keen-eyed, gracious but only to a point—still rings inside me. An unusually elegant memoir of a young girl’s unique coming of age.”

“This moving book came at me like a secret lost letter from a friend, offering-in Judith Freeman’s trademark frank and pellucid prose-a rich and revealing personal history of the world she knows as well as anyone: Utah, in this case the patriarchal cloister of Utah in the 1950s and 1960s. Her story is one of family succor and sorrow, and the flickering origins of shame. This is an affecting and tender memoir, as Freeman displays the dark wonder of the forces that shape our life choices.”

“The Latter Days arrived at four P.M. and I read until midnight, unable to leave this memoir. Judith Freeman’s book is elegant and precise, as is always true of her prose. In this memoir of her childhood and coming of age in a landscape of rigid belief and constraint, the undertone of wonder and the heartbreaking moments of trust that faltered, as it had to, Freeman sends rays of light straight into the reader’s heart.”

–Susan Straight, author of Between Heaven and Here

“A poignant, searching memoir of self-discovery.”

“I don’t know that there has been a more effective mapping of the subterranean emotional landscapes of day-to-day American religious life than Latter Days. But after so many years writing fiction, why a memoir now?” – Joanna Brooks:

Listen to the podcast interview with Tom Williams of Utah Public Radio – June 27.2016. (length – 54 minutes) below